James Robert Gililland was born in Brown, Texas, on March 22, 1874.  His family moved to New Mexico when Jim was thirteen.  He worked on various ranches, including the Oliver Lee ranch. Gililland was tall, lanky, and good-looking.  He was also known to drink.

Following the Fountain trial, Gililland started a ranch where he stayed almost forty years.  Upon selling the ranch, he and his wife spent a year traveling the eastern states.  They settled in Hot Springs (now Truth or Consequences), New Mexico, where Jim Gililland died on August 8, 1946. 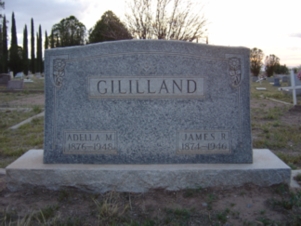 Grave of James Gililland and his wife Adella.